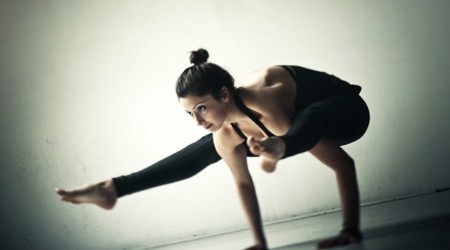 One of my favorite lines from the laugh riot Anchor Man is in the scene where Jack Black and Will Ferrell have an accident. Jack Black, in a fit of rage, then turns to Will Ferrell and says, “Now, this is happening.” A few weeks ago while watching this movie with some friends I had an epiphany. That single line of comedic genius expressed the sentiment that I feel best embodied what my yoga practice was becoming.

The first time I attended a yoga class I was very insecure about my flexibility and agility as compared to the petite acrobats that seemingly occupied the room. As a result, I would often over exert myself on poses I thought I could do well and not even attempt poses I thought I could not do at all. Both of these reactions were spawned from the same lack of self- awareness and presence in the current moment. Neither one of them did anything to further my progress as a yogi or as a human being.

Over exerting myself by not taking child’s pose, or any resting pose when necessary only compromised the whole of my practice. Over exerting one’s self in a yoga class can have long-lasting effects on both the physical and subtle bodies. On a physical level it can lead to tears, sprains, and strains. On an energetic level, over-working yourself during a yoga class can leave one feeling imbalanced and out of whack.

Likewise, fear of trying new things or exploring ones physical, emotional, and energetic boundaries can be crippling to one’s practice and one’s life. We often base our fears on past beliefs. This robs us of our ability to be present in our practice. Is it necessarily true that I am too clumsy to balance myself on my toes today because I was clumsy as a child? If I do not attempt, how will I know what it feels like for me today?

Becoming an advanced yoga practitioner doesn’t necessarily mean that one has the physical capability to come into a certain set of poses. There are many studios that encourage one to spend time trying to get back in contact with the self. Through yoga, pranayama, and meditation one can acquire the tools necessary in order to be with the present moment. Bringing this awareness with you off the mat and into every moment of your life can have tremendously positive effects. This connection with the self and with the present moment is the true goal of the yogi. Yoga is the study of self -acceptance. Not concerning your self with the results of the future, or the perceived missteps of the past, developing the ability to say, “Now, this is happening.”