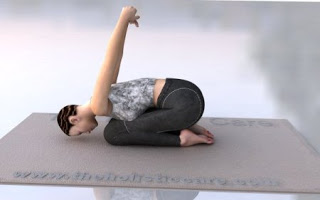 As one studies classic yoga texts, there is much discussion about the ability for a physical practice influencing the psychological, perhaps even spiritual change. In other words, if you do a prescribed set of actions to the body, then something happens to the mind. The twisting, turning, compressing, and elongating on the outside have a dramatic impact on what goes on the inside. Regular yoga practitioners often agree that practicing yoga postures leads to a calmer, more relaxed attitude.

Contrary to popular belief, traditional hatha yoga texts did not spend a great deal of time talking about the “asanas” (poses) and their benefits on the body, but rather devote much attention to the more subtle practices of raising the potential, unexpressed energy called “kundalini” into higher psychic centers. There are two main approaches designed to elicit this reaction, which are advanced yoga techniques:

First, there is “mudra,” which is a specific body configuration designed to coax the energy accumulated during asana and “pranayama” (breathing techniques) into the various psychic centers. This action provokes particular states of mind and can trigger specific emotions as well. With sufficient practice, the external senses turn inward and the pranic level (life force) is increased, resulting in spontaneous occurrences of mudras in a yogi’s body, with the hands, feet, eyes, arms and legs moving into specific positions.

Second, there is “bandha,” which is a source of great misunderstanding and confusion among yoga practitioners. Some practices are referred to as mudras in one text and as bandhas in another. To add to the mystery, such practices might even have different names in the same text. For the purpose of differentiating bandhas from mudras, many contemporary teachers define bandhas as “energy locks,” or specific physical location and action performed in order to prevent prana from escaping. These locks are “moola bandha” (perineum or cervix retraction lock), “uddiyana bandha” (abdominal retraction lock), and “jalandhara bandha” (throat lock).

Another way of thinking about the relationship between mudras and bandhas are that the former are, in general, more labor-intensive than the latter. Bandhas are perhaps tricky to locate, but a regular and sustained asana practice under the watchful eyes of a good teacher can develop these physical locks or at the very least, promote sensitivity and awareness around the perineum, abdomen and throat, which are key physical landmarks in the hatha yoga system.

Consider, then, one of the premier mudras: “khechari mudra,” which prescribes reversing the tongue into a very specific spot inside the skull (right behind the location of the third eye). The tongue should be massaged and pulled regularly. Then, the membrane connecting the tongue to the bottom part of the mouth (frenulum linguae) is cut a tiny bit at a time, at weekly intervals. The ancient texts say that a mixture of salt and turmeric is applied to the cut daily and after a period of 6 months, the root of the tongue will be completely severed.

The practice, also known as “nabho mudra” and “lambhika yoga,” is generally taught from an early age, from 12 to 16, when the body is still developing. It takes many years of practice in order to learn how to navigate the dislodged tongue through the nasal cavity at the back of the throat in order to each the eyebrow center.

The ancient texts speak highly of this practice (which must, of course, be taught from a guru), which is said to regulate the powerful secretions of the brain. The physical benefits of such as intense practice is perhaps too much for the modern person to appreciate, but once can begin to understand this mudra by turning the tongue backwards and touching the soft palate at the back of the mouth. Gaze into the third eye and breathe for 20 rounds.

It is said that khechari mudra directly influence brain functions and awakens the higher centers of awareness. May you find a higher purpose in this life: Om Shanti Om.